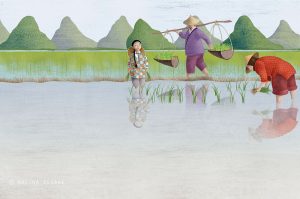 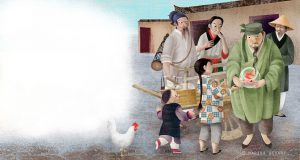 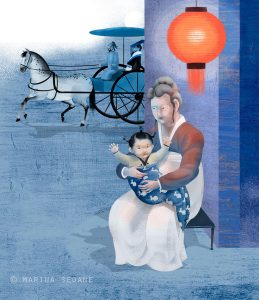 «Every morning, before the sun rose, Minli, her mother, and her father began work in the fields. It was planting season, which was especially grueling. The mud stuck to their feet like glue and each seedling had to be painstakingly planted by hand. When the hot sun burned overhead, Minli’s knees shook from weariness. She hated the feeling of thick, soggy mud on her hands and face; and many times she wanted to stop in irritation and exhaustion. But seeing her parents’ bent backs, patiently working, made her swallow her complaints and continue…»

«…Many years later, Magistrate Tiger had his dream fulfilled. He was finally able to obtain a match for his son with one of the emperor’s many granddaughters, and his son would inherit the rule of a remote city. On the wedding day, Magistrate Tiger bragged to his son about how he had arranged the marriage and outwitted the Man of the Moon. The son (who was not like his father) said nothing, but after the wedding ceremony, sent a trusted servant to find the grocer’s family to make amends. In the meantime, he became acquainted with his bride and was happy to find that both were pleased with each other. He found his new wife beautiful, the only oddity about her being that she always wore a delicate flower on her forehead. “Dear Wife,” he said, “Why do you always wear that flower? Even to sleep, you never remove it.”